If we called a rose a "triantafyllo" it would still have thorns and it would smell as sweet — or at least, that's what Shakespeare said. Approximately.

While the essence of a rose will remain the same no matter how we call it, the name we give to anything and everything surrounding us bares much more significance than we usually care to think about. People are biased towards the names we identify ourselves with and there are plenty of weird connections between the name a person gets at birth and the job they will hold, their athletic performance, their chances of getting an interview, or generally how successful they'll be in life.

When I think about it, it just feels weird to refer to a rose as a triantafyllo. (Please accept my sincerest apologies for creating this previous phrase if you're Greek; I meant no offence and I had absolutely no bad intention whatsoever. It just feels really weird.)

But I digress. My point is, we should all think twice when we have the power to give a name to something, whether we're talking about a baby, or a different kind of baby — like a new company, a new invention, or a new theoretical concept.

Morgan McCall and his colleagues, who are usually credited with originating the 70:20:10 ratio in the 70:20:10 model for learning and development, probably didn't get the memo. Or they did get it, but they were convinced that including perfectly even numbers in it is the best way to go. We'll probably never know. But we shouldn't hold grudges against them either.

Before I go into why I think they should have gone for a different name for this learning model, let's set one thing straight:

Don't get me wrong, I'm not against this model of workplace learning. I really believe it can be successful if consciously implemented in an organization. And my belief is actually based on science.

According to the In-Focus Report of Towards Maturity 70+20+10=100: The Evidence Behind the Numbers, companies that embrace this model are:

Another fact that was interesting from this report is that even companies that don't realize they're using it witness its positive results.

The numbers are not absolute! They are just guidelines.

Which really is common sense.

But the numbers are still in the name and they still raise some eyebrows.

Now let's move on to why eyebrows are raised regarding these numbers, the other way around:

These numbers are guidelines, so depending on each organization's learning needs, they can change: 10 may become 19, 20 may become 36, while 70 may become 47. You can make any other combination.

The numbers can change and they should change. But why stick to them in the name of this great model if they change?

There's no use in reinventing the wheel. Everyone knows what the numbers stand for:

Here's a picture from the 70:20:10 Forum, and they certainly know everything about it: 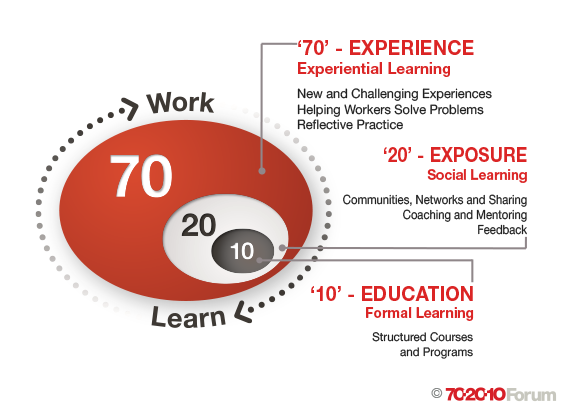 The 70:20:10 model, or the 3 Es learning model, or the Experience:Exposure:Education model? I honestly think the names without the numbers are better.

What do you think? Will we ever drop the numbers?

This post was originally published on Chief Learning Officer, on May 17, 2017.

What is GDPR and why should talent development professionals care?

On culture and other organizational demons (Part II)

Why L&D should gear towards talent activation