In the last on our series about the challenges in higher education, we will examine how universities and colleges are managing the fast pace of change in teaching methods and curricula.

According to UNESCO, global demand for higher education is expected to grow from 100 million students currently to 250+ million by 2025. Naturally, technology plays a central role in scaling quality education supply to meet this demand. Traditional universities will find themselves obsolete, unless they adapt.

In the previous posts on this topic our examination found that technology can and does help when it comes to improving completion rates, reducing tuition costs and helping universities to bridge the revenue gap. In this case however technology, and the need to adapt to it, is a part of the problem.

Blended and online learning is increasingly in demand by students. They expect the same flexibility, mobility and always-on services they get with everything from travel and entertainment, also from educational providers. Are universities adapting quick enough to this demand?

Read more: Why blended learning will become an educational norm

A second challenge, also associated with changes in the demand for higher education, is the nature of the curriculum. Demand for shorter, more focused courses is growing, and universities are finding themselves “unbundling” their core offerings in order to keep up.

A grim future for today’s providers of HE?

Putting a finer point on the problem is Nathan Harden, American education commentator, who in 2012 claimed, “In fifty years, if not much sooner, half of the roughly 4,500 colleges and universities now operating in the United States will have ceased to exist. The technology driving this change is already at work, and nothing can stop it. The future looks like this: Access to college-level education will be free for everyone; the residential college campus will become largely obsolete; tens of thousands of professors will lose their jobs; the bachelor’s degree will become increasingly irrelevant; and ten years from now Harvard will enroll ten million students.”

With slightly more academic credentials comes Clayton Christensen, the disruption guru, Harvard Business School professor, and author of the Innovative University. Christensen says, “I think higher education is just on the edge of the crevasse. Generally, universities are doing very well financially, so they don't feel from the data that their world is going to collapse. But I think even five years from now these enterprises are going to be in real trouble."

When, or if, this doomsday scenario arises for higher education, it will be a combination of the challenges we have examined thus far - costs of “campus-based” education, failing revenue streams, and expensive dropouts. However the failure to adapt to, and embrace, new learning technologies as well as other advanced technologies such as AI, data analysis and machine learning will undoubtedly be the death-knell for most colleges.

Let’s see where the problems lie:

There is evidence that universities have a slow-changing culture, when compared to for instance high- or secondary-schools. In Ontario, Canada, for instance, the somewhat shocking facts are:

A culture of swift curricula change is also less than optimal at traditional universities, where slow, committee-based processes dominate. Where enthusiastic faculty insist on teaching emerging trends or technologies they are compelled to do so as extracurricular courses. This tactic is often stymied by the fact that students have so little time as it is, as well as the fact that some universities don’t allow for credits from extra-curricular courses. This not only frustrates students, but employers are increasingly impatient, and have begun to find ways to connect directly with students with bespoke courses.

In other cases it is indeed the faculty that are resisting change. Justifiably proud of their academic tradition and quality of the education, some believe that this will be enough for the university to ride out the storm. Administrators and boards tend have a slightly more commercial point-of-view and are hampered in their efforts to implement change in response to the commercial imperatives by obstinate faculties. In essence, these opinions reflect what many people in the hospitality industry thought before AirBnB, or what taxi drivers thought before Uber. A denial of disruption contributes the slow change at many universities.

It’s almost naturally to imagine the brilliant, yet ageing, professor having trouble with newer communication applications or mobile LMS technology. However, the problem is as dire among students. We imagine them arriving on their first day of college all but fizzing with technological awareness and ability. While students may have an almost subconscious ability with social media, many are quite dysfunctional when it comes to leveraging online tools for hard, in depth research and learning.

It is perhaps ironic that colleges, under threat by students seeking better technology, need first to train some students on that technology. The graph below demonstrates that many students overestimate their information technology skills, compared with employers’ opinions. 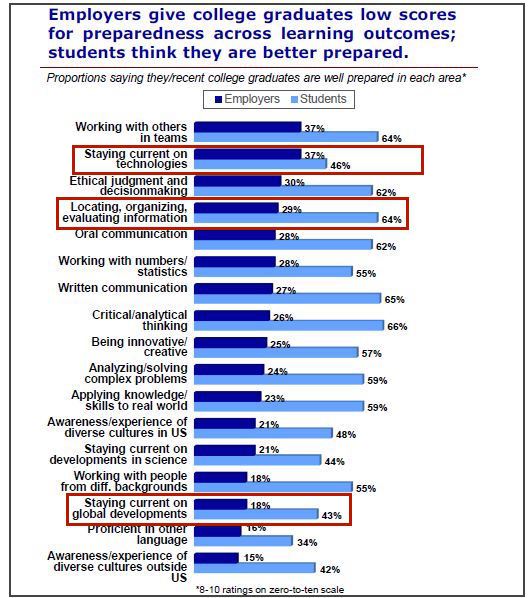 Having said that, there is also a skills gap among faculty. But again, a surprise awaits: faculty are less likely to struggle with the actual technology, than they are with adapting to an LMS and other technology for better learning. It seems that technical training is less relevant here than e-learning course design. It seems that many faculty are au fait with an LMS’s administrative abilities: posting assignments and grades, dropboxing students etc. but less likely to engage the software to create lessons.

After exploring this topic I have, perhaps, a controversial point-of-view: I’m not an absolute cynic, and I do believe that traditional, ivy-clad universities offer students the unique opportunity to “learn to think”, in an enabling intellectual environment. However, global market forces are making the elite access to that kind of education unsustainable, as well as inefficient.

Universities must in some way be liable to those market forces, and have to find ways to adapt to students and employer demands for greater access, flexibility and choice, as well as a range of learning styles and budgets. How else will we ensure that we are educating the most willing and talented rather than the most wealthy?

Perhaps, as with the retail, travel, hospitality, transport and manufacturing industries, higher education is due for major disruption. And as with all other disruptions it is likely to better serve the lower-end of the market who have been excluded from the efficiencies and quality that technology has delivered in these other sectors.

HE Challenges: How some colleges are filling the revenue gap

HE challenges: finding innovative solutions to the rising costs of attending university

Alexa goes to uni: how smart speakers found their place in HE