This is a detailed comparison between MATRIX and UpsideLMS, taking into consideration the features, functionality, and cost of each platform.

MATRIX is a learning management system (LMS) for use by small and medium-sized businesses, as well as large corporations. MATRIX helps companies manage all training activities, such as creating and delivering training content, evaluating employee performance, training clients and partners, and selling online courses. MATRIX is a product of CYPHER LEARNING, a company that specializes in providing learning platforms for organizations around the world.

UpsideLMS by Upside Learning is a cloud-hosted LMS for use by small businesses, training companies, and enterprises. 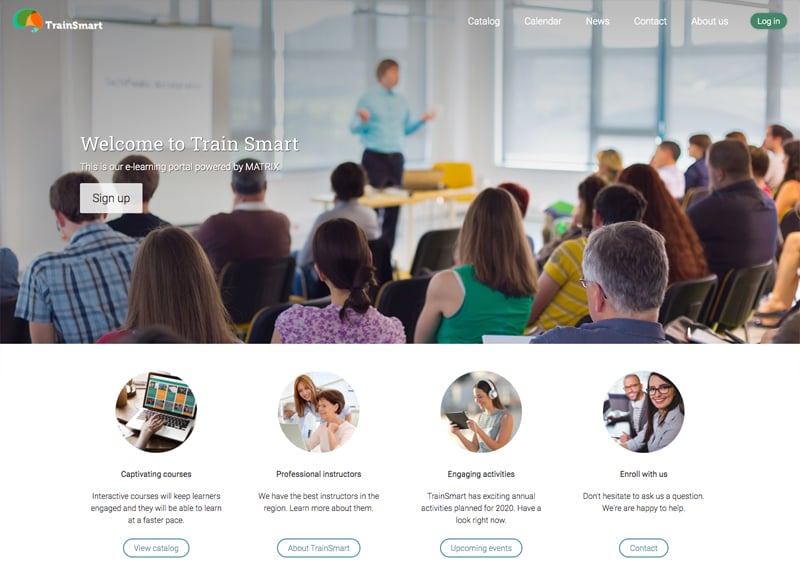 The MATRIX interface has a modern, responsive design that looks sharp and automatically adjusts based on the type of device. It provides attractive tile-based dashboards for learners, instructors, and administrators. In addition, the platform has a graphical course, users, and resources catalog. MATRIX also has a unique “activity display” feature that indicates the level of activity within courses and groups using a pulsing indicator on their tiles together with real-time widgets that scroll through the latest activities.

The UpsideLMS interface is much less graphical as the dashboard isn’t tile-based and the information about users, courses is structured in blocks that mainly contain text or charts. The blocks are not configurable and adding a decorative header image to the dashboard does not improve its overall attractiveness for users.

MATRIX also provides a course layout that is visually appealing and easy to use. Users can choose between a tile or row view for modules, use the quick tile editor to change the color and image for each, and more. Learners can read a description of each module and see their progress, as well as the number of badges, points or certificates awarded by each module.

UpsideLMS has a very outdated course layout. Instructors usually have to structure their training materials into “curriculums”, that will later display courses using unattractive blocks.

There are no previous or next buttons to navigate through the content, and they cannot see their actual progress through a section, only whether that section has been started or completed.

MATRIX is available in more than 40 languages. UpsideLMS only offers 5 languages.

Both MATRIX and UpsideLMS offer native apps for iOS and Android. Additionally, MATRIX provides companies with the option to have their own branded apps.

MATRIX ensures accessibility for all users with features such as hidden content, a “content” shortcut, underlined links setting, and a high contrast theme. UpsideLMS has no similar accessibility features to date. 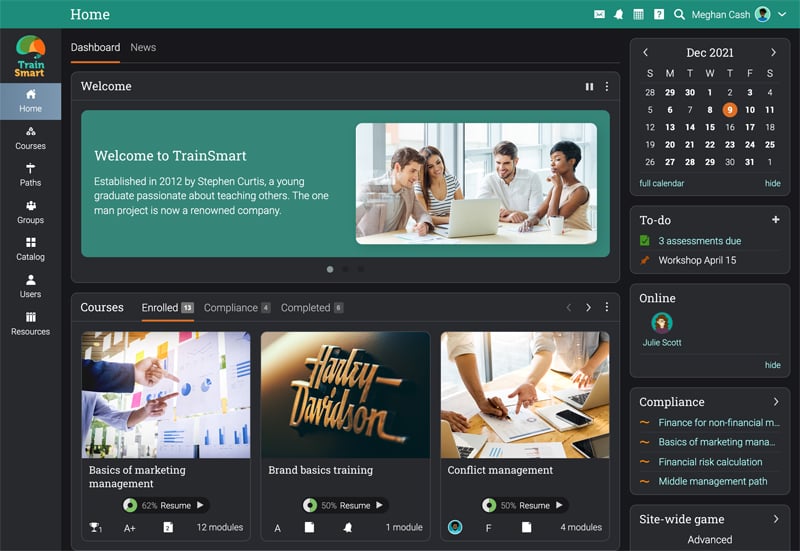 MATRIX is very intuitive and easy to use. In addition, it includes an online help center with videos, getting started guides, and searchable help content. MATRIX also has a rapid response support forum where staff members typically respond to questions within 15-30 minutes during business hours 24/5.

UpsideLMS is easy to use and offers support via email, phone, live chat, and a support center.

MATRIX offers a complete solution for companies that offer training for employees or partners, and an easy way to sell their learning content online. UpsideLMS has less features than MATRIX, most notably missing a built-in course authoring tool, automation, and more advanced e-commerce features.

In MATRIX, instructors can select the type of course that best suits their training style, whether it’s instructor-led, blended, self-paced, or micro learning. They can also easily create beautiful courses without any technical knowledge using our built-in content authoring tool or by importing their training using SCORM and LTI standards.

UpsideLMS offers the possibility of creating instructor-led, blended or self-paced courses. However, there is no built-in authoring tool so companies can only import courses.

UpsideLMS has very few options. Users can set up assignments or tasks for their learners. They can also add surveys.

In MATRIX, analytics allows instructors to view useful information such as the overall progress of learners and the progress of individual learners through sections, modules, assessments, mastery, and more. Administrators and instructors can also create custom reports and select the data that they want to report on such as users, courses, learning paths and organizations.

UpsideLMS also has similar reports for assessments, learners, or skill tracking, but lacks important reports on site statistics, attendance, policy documents, and revenue that is generated through e-commerce. In addition, it does not have a custom reports feature.

Through automation, MATRIX users can set up actions that should be performed when learners complete courses and learning paths, purchase a course, or fall behind on their mastery levels. Rules can be added for the major areas of the platform, such as groups, accounts, mastery, or e-commerce.

In addition, MATRIX users also benefit from a powerful gamification feature, which is based on automation and allows you to create course, learning path, or site-wide games. The feature is complete with game levels, leaderboards, team games, and more.

In addition, instructors can dynamically personalize which learning content users see in courses based on their performance through adaptive learning.

UpsideLMS does not have a similar automation feature. The gamification included in UpsideLMS is still in its early stages, offering points for overall site activities such as enrolling in a course, but no options for leaderboards, team games, or badges. The platform does not have an adaptive learning feature.

MATRIX allows you to create a branded visitor portal in which companies can showcase their courses through a public course catalog, add an about, contact or even public blog page. It also has a wide array of customization options such as adding an image carousel and custom HTML.

UpsideLMS has the option of displaying a course catalog on a company’s main website, but not many options for customizing the visitor portal besides adding a description of the company and embedding a video.

UpsideLMS has a built-in e-commerce feature, but companies cannot sell bundles, subscriptions or digital media. In addition, the platform does not support flexible discount coupons or VAT.

Here is a list of the features included with MATRIX that are not supported by UpsideLMS:

MATRIX LMS plans range from $549/month for 100 active learners (monthly billing), to $4,699/month for 3,500 active learners (monthly billing). There is a discount for yearly billing. There are no setup fees, cancellation fees, storage fees, bandwidth fees, support fees, or other hidden costs. MATRIX offers advanced features, such as full e-commerce functionality in each of the pricing plans.

UpsideLMS has a similar price range, with the mention that for almost the same price MATRIX provides a significantly larger feature set. For example, MATRIX supports more than 40 languages, while UpsideLMS users have to pay $500/year for the addition of a language (out of 5 available ones).

This was a comparison of the most important feature differences between MATRIX and UpsideLMS.

If you require additional information on MATRIX, please contact us.

This comparison paper was written in May 2021 based on publicly available documentation on both vendors' sites. It was prepared as a guide and is not intended to be exhaustive. The comparison information is for guidance only and does not constitute any contractual representation, warranty or obligation on our part. Liability for errors, omissions or consequential loss is expressly disclaimed.

Since pricing and features can change rapidly, we do not represent that this information is up-to-date, and we encourage you to get the latest information directly from the vendor's web site. If you find any information in this comparison guide to be inaccurate, please contact us with details and we will correct the information within 72hrs.